UK fashion has certainly had its ups and downs over the last 40 to 50 years.  The trouble is it’s very difficult to pin down what was the worst decade for fashion.  On the one hand you could argue that the 1970s was the worst, however you can still see that this was the beginning of Calvin Klein Menswear, available from EJ Menswear, entry onto the fashion world  stage so how can that be bad?  Others  will   point to the 1980’s and the wild   excesses  that this decade promised.  Let’s have a look at each one. 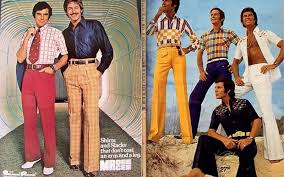 The 1960s sees the birth of colour and patterns for men.  Denim and jeans are still the most dominant clothing  choice but the rather scruffy liberal look that comes into place at the end of the decade was very far removed from the stuffy suit and jumper at its beginning.  Rock and roll was now totally established in the country and popular music was heavily influencing what people wore and what they did in their lives.

If the 60s open the door the 70s firmly shut it again.  Flares and androgynous clothing began to make things a bit more confusing to people as to how they should be dressed.  The advent of punk was initially anti-fashion and anti-uniform but soon that leather jacket and the denim became a staple part of the punk music scene.  This rather defeated the point of it.

The 1980s saw a return to a more glamorous look with the new Romantics. However it also gave us power suits and leisure suits which were a bit of a disaster.  The bright colours from the TV show Miami Vice were a huge influence on men’s fashions but by the end of the decade Denim and jackets and t-shirts had returned.