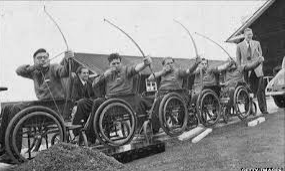 The Paralympics runs alongside the Olympics and it allows those athletes living with a variety of disabilities to compete. Many of these athletes will have disabilities that either they were born with or have acquired throughout their lifetime. Some of them will use Mobility Aids like the ones from https://www.abilitysuperstore.com in their everyday live.

Since 1888 there have been sport clubs for the deaf in Berlin, with the first of them being established in that year. There have also been sports clubs for athletes with disabilities for well over a century.

However, it was not until after World War II that it was widely adopted as a way to allow disabled people to compete in athletics events. In that time, the purpose of the program was to provide assistance to the vast number of war veterans and civilians who had been injured in the course of a war.

A spinal injuries centre was opened by Dr Ludwig Guttmann at Stoke Mandeville Hospital in Great Britain in 1944 at the request of the British Government and in time, rehabilitation sport evolved into recreational sport and then into competitive sport at Stoke Mandeville.

As a result of the Stoke Mandeville Games, the Paralympic Games were introduced in 1960, with 400 athletes from 23 countries taking part in the first incarnation of the games. They have taken place every 4 years, the same as the Olympics, ever since.