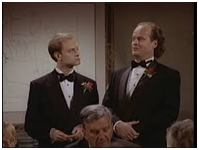 Last night I was flicking through the TV channels desperately trying to find something to watch. After surfing through what felt like hundreds of channels I was about ready to give up when I stumbled across an episode Frasier. Now that’s a program worth watching! I had forgotten how much I enjoyed watching Martin and Frasier desperately trying to create a meaningful father son relationship; the will they won’t they feel of Frasier and Roz relationship; Niles falling deeper and deeper in love with Daphne whilst she is blissfully unaware and not forgetting the adorable and ever humorous Eddie rolling around on Frasier’s expensive sofa. I have one that looks very similar to the one I purchased from Sofas Gloucester firm https://www.gloucestersofasandbeds.co.uk/sofas/

Anyway, it got me thinking about my favourite episodes, so here are just a few of them:

What is your favourite episode?